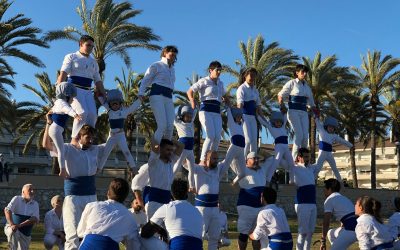 Castellers of London are excited to let you know that we’ll performance with Falcons de Vilanova – Barcelona (*) on 11th May at The Garito, Hackney (London)

(*) The Falcons are a part of Catalan popular and traditional culture which involves the construction of human figures. http://www.falconsdevilanova.cat/

(**) Castellers of London is made up of over 90 members with more than 9 different nationalities and languages who live in London with a common passion: “Castells” (Human Towers).
“Castells” building is a Catalan tradition where amateur groups or teams, called “colles”, rehearse and compete to build towers as high and as complicated as possible. There are over 100 official “colles”, and Castellers of London is the first “colla” established in the UK.
http://castellersoflondon.org.uk/