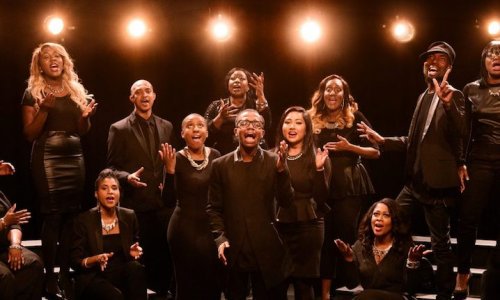 Next Sunday 3rd June stars from the  London Community Gospel Choir  will be performing at the  Shiloh Pentecostal Church, Ashwin Street Dalston. Pastor Francis Lewis will open its doors at 6.30pm and inviting everyone in our local community, of all faiths and none, to share this massive treat. This event begins at 7pm and will be unmissable! It is part of the DalstonArts150 events celebrating Dalston’s 150th anniversary of its association with the arts

Pastor Lewis, and musical director Jonathan Tuitt, have assembled some the finest stars of UK gospel music who will be performing a Night of Praise. The London Community Gospel Choir  travel the world enthralling audiences with their vibrancy, passion and the beauty of their music

Also performing will be Howie Hutchinson, born in Kingston, Jamaica in 1969, and who from an early age was said to have been created by God to sing. They were right! He is now a hugely popular reggae star

Also performing is Hackney’s very own singing star Shezar – a young woman who is deservedly attracting more and more attention!
This will be an unforgettable evening as part of DalstonArts150 events celebrating the 150th anniversary of Dalston’s association with the arts.  And if you arrive in good time then pop into the Printhouse at 18 Ashwin Street to see the DalstonArts150 exhibition. It tells the story about Dalston’s diverse cultural and architectural heritage and is open from 3-9pm over the weekend