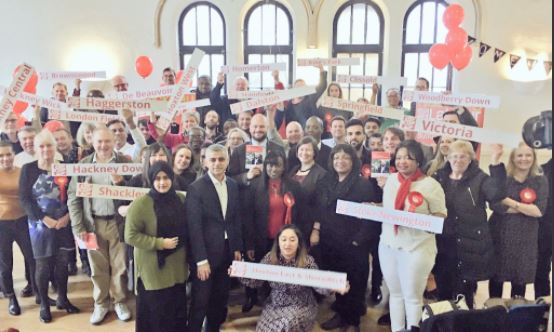 Labour have brought Sadiq Khan, The Mayor of London to Hackney to launch their manifesto.

Philip Glanville, Labour’s candidate for Mayor of Hackney for the next four years, presented the manifesto.

He said he was proud of the achievements and progress of improving services and facilities so that Hackney is now ‘one of the best Labour Councils in the country’.

He emphasised: ‘We have been at the forefront of the fight against police cuts, we’ve stood alongside families in the community against knife crime, and we’ve fought the deepest education cuts for a generation.’

He said that ‘as a campaigning council, we have stood up for our fellow European citizens and continue to fight a hard Brexit, fought for proper investment in public services, fought for the Dubs Amendment supporting refugees and settling families’.

He added that the Labour Council has campaigned for the Living Wage, and also pay it; ‘we created a bursary for childminders, we created more than 100 apprenticeships, we’re building new schools’.

On housing, he said that the Council is building council houses – 3000 new homes, half of which will be at council rent or shared ownership – and private renters will be better protected and landlords of HMOs will be on a warning.

He underlined – ‘This manifesto is on the side of those who still feel excluded, for those who are worried about how the borough is changing and where they fit in. That’s why we’ll create the Mayor’s Hackney Future Commission, to give young people a real voice in the future of their borough.

‘This is a manifesto infused with hope and municipal socialism at its heart that will maintain that diverse and tolerant Hackney we love.’

the full manifesto can be downloaded here.

One thought on “Labour publish their manifesto for Mayoral elections”