This consultation seeks to gather your views on Hackney Council’s proposals to improve the environment for cycling as part of the Cycle Superhighway Route 1 (CS1) on West Bank between Amhurst Park and Dunsmure Road.
The proposals will create a protected cycle track by removing the parking spaces on the eastern side of West Bank.

Why We Are Consulting

The Council is committed to making Hackney’s roads safer for everyone living, working and visiting the borough. These changes aim to create an environment that will encourage more walking and cycling, improve air quality and reduce emissions within the local area.
Our Transport Strategy includes a Liveable Neighbourhoods Plan, which recognises that streets like West Bank are not just places to park vehicles or drive, walk and cycle on. They are also the places where we socialise and live our lives. An aspiration is to reclaim Hackney’s streets from parked vehicles and motor traffic congestion and transform them into the most attractive and liveable neighbourhoods in London.
This can only be achieved by reducing the dominance of the private vehicle. Poor air quality resulting from vehicle emissions is finally being recognised for the damage it inflicts upon the health of the city with nearly 10,000 Londoners dying early every year as a result (Kings College London, 2015). Even more disturbing is the direct impact it is having on our children’s health with evidence proving it is directly responsible for
alarming rates of asthma and other respiratory illnesses in our schools (GLA, 2008).
The Transport Strategy includes a number of actions that are relevant to this scheme:
• LN3: Improving air quality – Tackles poor air quality, reducing NO2 and PM10 emissions
• LN15: Filtered Streets – Reduces motor traffic on residential streets by use of temporary road closures or one-way systems to create safer walking and cycling conditions
• C8: Reallocation of road space – Continues to reallocate road space from private motor vehicles to cycle infrastructure provision
• C33: Area Based Filtered Permeability Reviews – Undertakes area wide traffic reviews to stop rat running and continue the rollout of filtered permeability schemes
People have raised concerns with the Council about the volume of vehicular traffic and the difficulty to negotiate this particular road in both directions.
West Bank is a busy, narrow road with vehicles parked on both sides and queuing, mostly northbound, during peak hours. People cycling northbound are often tailgated aggressively by drivers trying to pass where there is no space. People cycling southbound have to avoid oncoming vehicles travelling at relatively high speeds for the road and are in danger of being hit.
Taking these concerns on board, we are proposing to install a protected cycle track along the whole length of West Bank.
A key objective is to create a safer, more pleasant environment for cycling on the CS1 route along West Bank.
Introducing a cycle track along West Bank should lead to:
• less road danger and accidents
• less anti-social behaviour from inconsiderate parking and dangerous manoeuvres
• reduction of noise due to fewer drivers trying to find parking spaces
• improvement of air quality due to fewer vehicles being able to park on the road
• a quieter road for residents and pedestrians, contributing to the objective of a ‘liveable neighbourhood’
• a safer route for cycling
• less congestion, fewer conflicts between drivers and cyclists and less driver aggression.
What is the proposed scheme?
Please refer to the attached drawing for details.
In order to improve cycle facilities for cyclists using the CS1 route a protected cycle track at carriageway level will be implemented.
• Road markings and cycle infrastructure such as ‘armadillos’ (see image below) will be installed to protect the cycle track from motor vehicles. 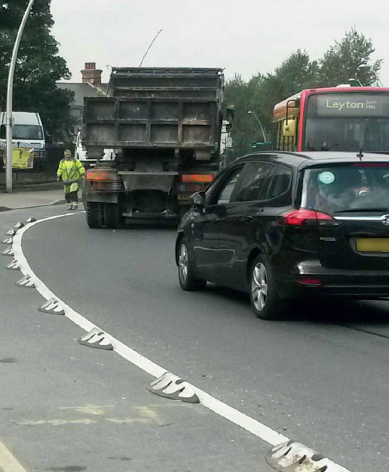 • Parking facilities along the eastern side of West Bank will be removed to allow for the new cycle track. Analysis of parking stress surveys indicates that vehicles will be able to use other unrestricted parking spaces in the close vicinity of West Bank.
• Overhanging tree branches and other vegetation next to the rail track will be trimmed
in order to clear the space for the new cycle track and to improve the visual amenity of the nature reserve along the embankment.
• Removing the existing kerb extension at West Bank junction with Dunsmure Road.

Give Us Your Views