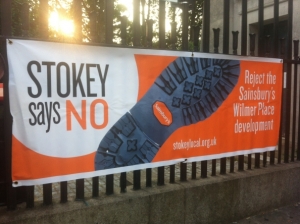 On 11 December 2013, Hackney’s Planning Sub-committee recommended granting of an application that was literally identical (save for some paperwork) to the one it granted in July. It did this because we challenged the July application in the High Court, through the Judicial Review process.

After the December meeting we asked our supporters to write to the Secretary of State to ask him to “call-in” the decision, but despite a wealth of support, felt he was unable to intervene. In fact very few applications are called-in each year, so it was, perhaps, no surprise.

With the earlier application waiting to be heard in Court, the applicant and Council were premature in dealing with the December recommendation – after all they had not yet heard the Court’s view on our challenge so were likely to make similar mistakes to those it made in the earlier granting of permission.

On my instruction, our fabulous legal team (who are working at no cost to the campaign) have been poring over the evidence generated by the December recommendation to gather grounds to challenge it, too. And on Friday 14 March they sent a formal letter to Hackney detailing why we think the decision on the latest application was unfair, perverse, irrational and wrong. We await a response from Hackney and the applicant, at which point we will consider asking the High Court to overturn the latest decision too. We must formally do this by 28 March 2014. So stay tuned.